The Regional Arts Australia biennial national conference, Junction 2010, took place in Launceston, Tasmania, 26-29 August 2010. With the themes of Footprints, Threads, Resilience, Momentum, the conference aimed to bring together ‘artists, art workers, volunteers, policy makers and those passionate to learn how the arts connect communities to a vibrant future…’, as the Junction organisers put it. 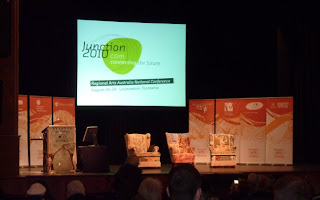 Princess Theatre stage for keynote speakers 2010
Tea-towel upholstered chairs by Sue Hall﻿
The demographic of the regional arts  – including artists but heavy on facilitation and governance – reflected the ‘deficit thinking’ identified by Kieran Finnane in an article for Art Monthly Australia (#231, July 2010), reflecting on the previous RAA conference, Alice Springs 2008, and a provocation to the Launceston event.  Finnane identifies the framing of the RAA conference through ‘social amelioration … with the majority of the work under consideration being community arts projects’. This, Finnane argues, presents the view of regional life always being in deficit, and the apparently easy conflation of regional arts with community arts, which ‘sells short the variety, depth and dynamism of art, artists and audiences in non-metropolitan Australia.’ There is no denying by Kinnane that there is excellence in arts practice in the regions: there are plenty of examples from Tasmania alone of regionally-based artists who work on a national and international level – Philip Wolfhagen, Troy Ruffels, Kit Hiller, Raymond Arnold, to name just a very few. 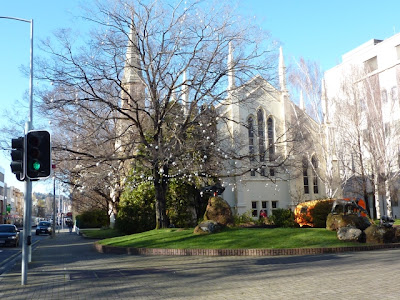 Sonja Hindrum (and many volunteers) Pleiades, felted balls
Civic Square, Launceston, 2010
At Junction 2010 the program almost certainly shared many similarities with that of Alice Springs (which I did not attend). The keynotes, however, were decidedly global in outlook. In the presentations by Francois Matarosso and Ernesto Sirolli the most local, community-based projects were conceived and presented within the context of being a part of a web of communities within regions which all held an equal place in their contribution to a globalised environment. Even Jane Bennett viewed her dairy farm and cheese business in blip-on-the-map Elizabeth Town and its venture into arts entrepreneurship through global connections, rather than the restricting  comparisons of a deficit frame. At a secondary level, this globalism was couched in terms of collaborations, a key defining element of contemporaneity (perhaps too often read as only manifested in an urban context) in arts practice. 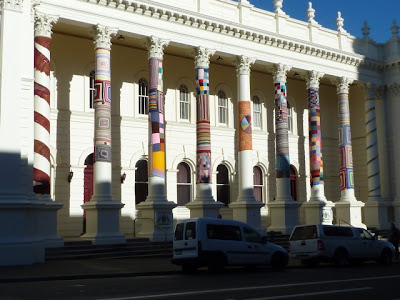 Community art? Knitting swathed columns on Launceston Town Hall 2010
The Junction Arts Festival associated with the conference was where you found the artists – hundreds of them, and many, perhaps the majority, not participating in the conference itself. Out on the streets the buzz was palpable, indeed it was more of a throb if you ventured to the Junc Room – a circus tent erected in Civic Square – for a night of music and performance and quite a few wines. This evident split between practicing artists (emerging, established, amateur) and arts business (the policy makes and facilitators) may be worth considering by arts organisations in managing any future deficit thinking. 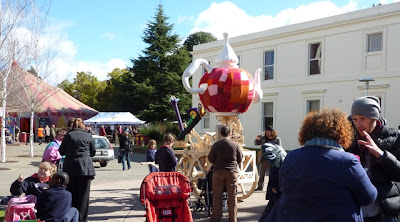 Civic Square, with Junc Room (the big tent), Wild Willow Cafe, Cart de Clarendon (with teapot)
Ross Byers (creator of the Cart) on right, talking to Sonja Hindrum (Pleiades)
Kinnance was reflecting on a conference held two years ago, and there have been shifts in broader government policy since then which are beginning to impact on the regional (and metropolitan) arts. The most pervasive of these is ‘social inclusion’, which will almost certainly seem a continuation of the deficit thinking Kinnane identifies, if with a shift in focus and the imposition of a more directed metropolitan-framed funding model impacting on its implementation. Ironically perhaps, the rhetoric of social inclusion enforces deficit thinking in the arts, by enshrining the arts as solutions to problems of social exclusion in health, law and order, town planning, environmental amenity – the list is endless. When in deficit, or identified as excluded, roll out an art project. It will be fascinating to see how the next conference, in Goolwa 2012, addresses the imposition of deficit (through the rhetoric of social inclusion) and the practice of community through the identification and, occasionally, enforcing of identity through exclusion.
(Disclaimer: I was involved with Junction 2010 at a committee level – but with no input on program content – and as a full-fee-paying delegate). 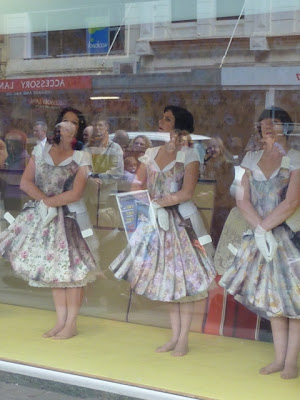 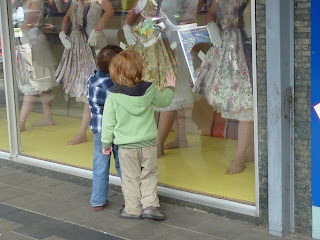 And on the final day, with the weather clearing to spread some late winter sunshine:﻿
Four views of The Zero Project, Kings Park, Launceston 2010
Eko Prowato (Indonesia) in collaboration with Ralf Haertel (Tasmania)
Created with zero material budget. 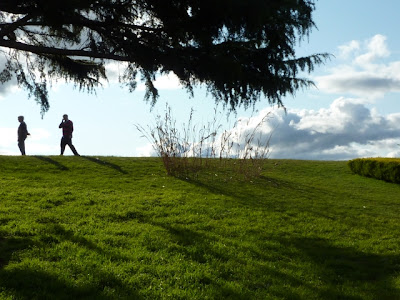 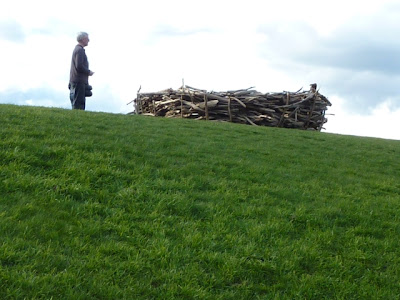 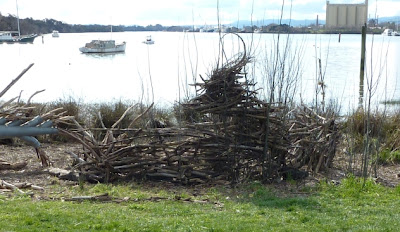 The recent development of the first Australian variety of pineapple may have struck anyone who cared at all as surprising – particularly those of a certain age who were brought up with the understanding that pineapples came from Queensland, in cans, under the Golden Circle label, endorsed by the Women’s Weekly and New Idea, and are as Australian as Vegemite, Aeroplane Jelly and the Iced Vo-Vo.  A longer pineapple history, one inseparable from ideas of empire and colonialism, was flagged when the Historic Houses Trust of New South Wales this week advertised a talk in their series Colonial Gastronomy, on jelly moulds and jelly making. There, right up amongst the wobbly wonders in the advertising copy, was a glowing multi-toned pineapple:
According to the chronicles of Pedro Martyr de Langleria (1530), the pineapple Ananas sp. was ‘discovered’ – at least in the Western experience – by Christopher Columbus on 3 November 1493 on the island of Marie Galante, near Guadaloupe in the Lesser Antiles. In a moment that raises some questions about what it is to be human, sailors from Columbus’s ship rejected the cookpots of human remains in a recently-deserted village and fell instead on the piles of fresh vegetables and fruit nearby. Perhaps that story is apocryphal, or distorted in its condensed form, but it is certain all the fruits consumed were recorded, and it was the pineapple that became almost immediately the subject of ongoing wonder and discussion.
The pineapple’s distinctiveness was not just in its form, which defied classification by comparison to any other known fruit, but also in its taste. It refused to be ‘like’ anything else. Brigid Allen in Food: an Oxford anthology (1995), cites early sources on the curious taste of the pineapple.
Richard Ligon (c.1650) records, ‘…when you bite a piece of the fruit, it is so violently sharp, as you would think it would fetch all the skin off your mouth but, before your tongue have made a second triall upon your palat, you shall perceive a sweetnesse to follow, as perfectly to cure the vigorous sharpnesse; and between these two extreams, of sharp and sweet, lies the relish and flaver of all fruits that are excellent …’ [spelling as original]. John Evelyn recorded in his diary (1668) that he was rather disappointed that the pineapple did not quite live up to Ligon’s advance publicity, but ‘tastes more like quince and melon’. William Stukely (1741), on tasting an English-raised pineapple, described it as. ‘a most delicious mixture of a pomegranate, a melon, a quince and most other fine fruits’. Had he read Evelyn, but added a fashionable pomegranate to update the observation?
The first English pineapple recipe appears to be from a 1732 cookery book by Richard Bradley:

To MAKE a TART of the ANANAS, or PINE-APPLE from BARBADOS

Take a Pine-Apple, and twift off its Crown: then  pare it free from the Knots and cut it in Slices about half an inch thick: then ftew it with a little Canary Wine or Madera Wine, and fome sugar, till it is thoroughly hot, and it will diftribute its Flavour to the Wine much better than anything we can add to  it. When it is as one would have it, take it from the Fire; and when it is cool, put it into a fweet Pafte, with its Liquor, and bake it gently, a little while, and when it comes from the Oven, pour Cream over it, (if you have it) and ferve it either hot or cold.

Bradley slices his pineapple to the same thickness as Ligon had recommended in the previous century – half an inch (approx. 1.25 cm), also very close to that in the canning industry. The slicing prepares the fruit for a culinary transformation, a domestication of the pineapple, which loses its physical identity and something of its symbolic value in becoming an ingredient, just another food. This transformation – aesthetic, economic, political – marked the change in how the pineapple would be considered by the time Australia was colonised and pineapple-shaped jellies dished up at Vaucluse House in the following century.
﻿
﻿