ITERATION: AGAIN (and again and again ...)

Iteration: Again is a series of thirteen commissioned public art works taking place across Tasmania over the four weeks from 18 September to 15 October. The whole shebang is produced by CAST, with curatorial overview by New Zealander David Cross. A swag of local and international artists have  been brought together by seven further curators to create events and placements around Hobart, Launceston and a number of points in between.
At a curatorial conversation at Sawtooth ARI, Launceston, on 22 September, Cross outlined the project, identifying his interest in commissioned temporary public art. The curatorial brief was based around playing with ideas of duration and time, with thinking about public art through the framework of time in particular ways. Stories, chapters, iterations, cycles came into play, along with the opportunity to include performative, live dimensions to the work. Each work was to be remade, re-iterated, displaced and revived in a series of audience engagements over the term of the project. This allowed for an audience to engage with, and to follow, a work over a number of iterations - typically four 'moments' over the duration of a project, with a significant multi-faceted works creating a series of overlapping termporal frameworks. The specificities of places and their histories were crucial for the curators, with an emphasis on research. 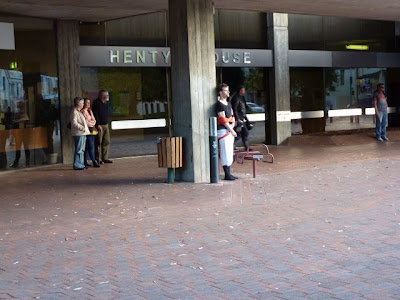 Launceston theatre-based outfit Voice Theatre Lab, led by Robert Lewis, came up with their contribution to the project with Two Houses, curated by Damien Quilliam, Curator of Contemporary Art at the QVMAG. The scene was Civic Square, Launceston, between the brutalist centre of bureaucracy, Henty House, and the centre of early colonial commerce, Macquarie House. 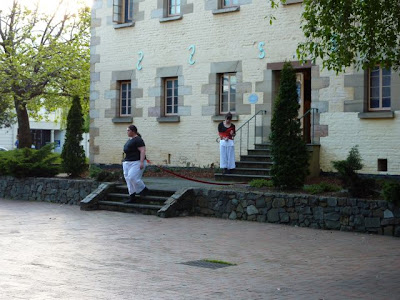 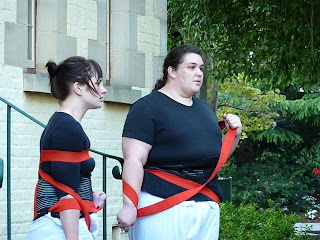 The action developed through five performances (two to go at time of writing) references the tale of the two houses of Romeo and Juliet, the Montagues and the Capulets. With Voice Theatre Lab's emphasis on the coalition of movement and sound built around both Buto and Western voice practices, the slow mesmerising action is well-supported by oddly affective non-verbal sound pushing many of the emotional buttons. 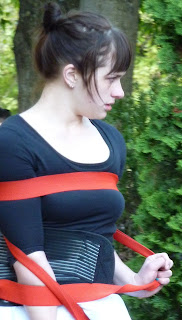 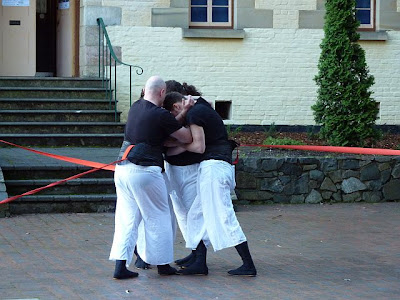 Rob Lewis, Laura Bishop, Chris Jackson and Shannyn Foon bridge the gap with all the tension the symbolic red tape allows. A sound installation emanating from Macquarie House inhabits the space between the Friday 5.00pm performances. 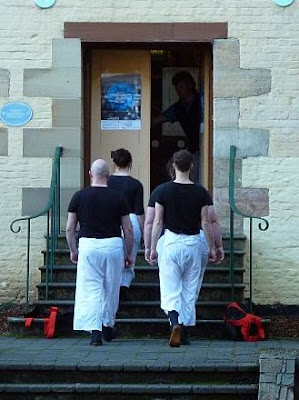